The nuns at the monastery of Lunden belong to the contemplative branch of the Dominican Order.

The community is connected to the French federation of Dominican Nuns.

The community was founded from a Monastery of Dominican Nuns in Lourdes, France. The first nuns arrived in Oslo June, 7th 1951 and a suitable and large property was generously donated to them by a Norwegian lay Dominican. The Monastery became independent from Lourdes in 1959, and the monastery buildings were completed in 1966.

Let all of you then live together in oneness of mind and heart, mutually honoring God in yourselves, whose temples you have become.
(The Rule of Saint Augustine) 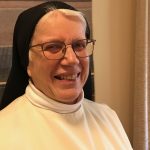 The Dominican Order – Ordo Prædicatorum – is an international order of preachers with activities all over the world. The vocation of the Order is to proclaim Jesus Christ for the salvation of souls. 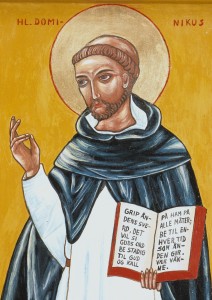 The Order was founded by Saint Dominic (ca. 1170-1221), and it received its official approbation in 1216.
The first monastery of Nuns was however erected as early as 1206.The Dominican Order, represented by the friars, was active in Norway from the 1230s. They had convents in four towns, Oslo, Bergen, Trondheim and Hamar. Monasteries of Dominican Nuns did not exist in Norway during the Middle Ages.

The Reformation in 1537 which was forced through by the Danish King, put an end to all monastic and catholic activities in the Kingdom. The Lutheran Confession the religion of the State having the King as the head of the Church. It also became the only accepted religion in the country. The presence of the Catholic Church was again tolerated from 1843, and Orders of Monks from the beginning of this Century (The Jesuits from 1956!).

In 1921 the Dominicans came back to Norway and founded a convent of friars in Oslo; St. Dominic’s Friary. Today the female branches are represented with a Convent in Bodø Mariaklosteret, Katarinakonventet in Oslo and the Monastery of the Annunciation – our monastery.

The Dominican Nuns realize the mission of the Dominican Order by their life within the monastic enclosure. In stead of going out to proclaim the Gospel of Christ, their vocation is to work for the salvation of the world through prayer and worship, in penance and renunciation and in seeking to live as a reconciled sisterhood.

Curious… ready to to explore… want to know more…?

Read more about our life as Dominican Nuns or about vocations.